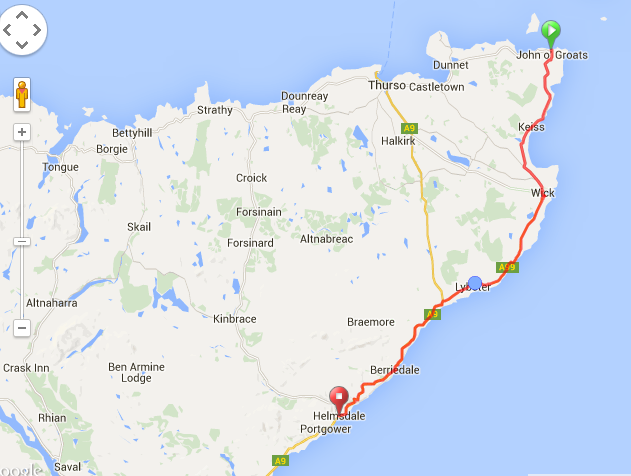 I always find getting started and underway on one of these rides a combination of nervousness, anxiety and great excitement. This was my 4th long-distance ride, and in a country that I had only been to before my cycling days, so I had never really viewed roads etc from a cyclists perspective.

There were many differences this time around, with the main thing probably being that my support vehicle was a car as opposed to a campervan and that we would need to get accommodation each night – small “pubs” or B & B’s were going to be our preferred option. At this stage, I had only booked the night before we set off (in Wick), and the first night at Helmsdale as I was unsure if I would be able to meet the daily targets I had set.

The first day or two of any trip is rather "unsettled", but a “pattern” emerges and a daily riding routine sets in and things generally became smoother. I just had to hope that this would be the case again!!

I am normally an early riser, and am quite happy to have a quick breakfast, jump on the bike and be off on my way. With the majority of accommodation in Scotland and England in places that included breakfast, it soon became evident that I would be starting later than what was my “normal”.

Early morning of the 7th June was very cloudy and overcast. We had been able to eat a Continental breakfast at the B&B earlier than their normal breakfast hours before the three of us – Pat, Pauline and myself climbed into the car with my bike Finn, to drive the 25 kms to John o Groats to start this journey.

I had intended to start at 8:00am but had to sit out a very heavy shower. It was bitingly cold, and very VERY windy but at least a Westerly!

It was a thrill that a facebook contact from a Bicycle Touring Group I belong to came along to the start-line to wish me well. Thanks Jamie!! Another cyclist rocked up while I was there, and he was beginning his 5th JOGLE ride – and explained how each time he tried to beat his previous time. He was on a nice road bike, travelling with the tiniest of back-packs, unsupported and taking the direct 874 mile route. He expected to be at Land's End in 6 days!!!!

After the obligatory photo’s were taken at both the main signpost and the “End to Enders” signpost I was off on my way. A few undulations in the first 10 kms and then a lovely tail wind as I flew back into Wick before turning in a more southerly direction which saw the lovely tail winds become cross winds. Meanwhile Pat and Pauline had returned to the B&B to pick up all our luggage which wouldn’t fit in the car as well as Finn and I.

That plan worked well, and our host at Wick – Julie from Impala Guest House – generously donated to The Fred Hollows Foundation. Thank you Julie!!

Light showers came and went all morning, but I made pretty good time as I proceeded along the A99. Traffic was pretty quiet – I guess because it was Sunday. Pat and Pauline caught up with me close to the village of Ulbster and we agreed to catch up again at Latheron - where we would join the A9. In my initial planning this was going to be where I was to stop for the first night. I was feeling good at this stage so was glad I had extended the first day of riding. There was some beautiful coastal scenery and I was frequently able to look to my left for stunning sea views, even though with the heavy cloud and occasional shower it was somewhat dull.

After the second meet up – it was decided to have a more substantial snack at Dunbeath which would be at the 60 km mark. From studying the elevation chart I had prepared, I knew that while I would have less than 30 kms to go for the day from there, it was going to include three very steep climbs.

I had seen three cyclists (a solo rider and a pair) travelling in the opposite direction and it was great to wave and sing out “g’days”. I thought how lucky they were to be “nearly there” – but I was also excited that I had 3 weeks of cycling ahead of me.

Of course I had to stop at a sign indicating I was travelling through a spot named “Newport” – not that there was much there!! A few houses back up the hill further, and at this stage I must have been about 100 metres above sea-level, so goodness only knows where the “port” was.

Before too long, a pretty steep downhill signalled I was about to start the 3 decent climbs of the day. The going got tough – it was difficult to go too fast down hill as the roads were quite wet and very bendy, so once on the uphill it was just push push push up the other side in granny gear!!

Pat and Pauline had gone on to Helmsdale where we were staying the night. I had to have a wee walk on the second climb, again so hard to get momentum from the downhill to help with the subsequent uphill. And then for the third of the climbs … I seemed to round corner after corner and the road kept going up!! I felt buggered, and hopped off the bike for a while and rang the troops to find out what the rest of the journey would be like.

Pat gave me a bit of a pep talk and told me they had spoken to a group of 5 cyclists heading north and had warned them of steep hills ahead. They assured Pat they wouldn’t be walking – but when I met them – 3 were cycling and 2 were walking!! I was delighted to find that I was not far off the top of the last hill (thank goodness)!! Once finally over the last highest point (and toughest of the climbs) it was all downhill back to sea-level and the small fishing village of Helmsdale.

My new jacket having its first wear today proved to be a great investment. It stopped the cold wind biting through me, and not a drop of water from the many showers got through!! Finn went well too!!

So thinking things had gone well for the day, on my arrival in Helmsdale I was greeted by the news that Pauline had taken a tumble when Pat and her were going for a stroll to a coffee shop and had seriously hurt her ankle. Oh no!!!!! It had swollen up and looked really bad and we wondered where to get medical advice. We were in a remote part of Scotland on a Sunday night. While in a lot of pain, Pauline felt that as she was able to put weight on it immediately after the fall that nothing was broken – so we decided to press on with the RICE treatment method. So for Pauline, she explored Helmsdale through our reports as she rested up in her bedroom with ice on her ankle after taking a couple of pain-killers!

While we had accommodation for the night – none of the 3 pubs in the town were serving meals on a Sunday night! Pat and I eventually found the one and only restaurant that was open so dined there. The restaurant – named ”La Mirage” – was nominated by Clarissa Dickson-Wright as one of the 6 best fish and chip shops in the UK. We spotted a TV crew while we were dining, and after dinner we wandered around the harbour to discover that locals had tried to rescue a whale that had sadly died. Was funny to see this on the news the next night when we had travelled on to Tain.

We stayed at Ann McDonald’s B &B, the 200 year old Customs House building. Ann must have been in her 80’s and had been born in the house and never moved out!! It was a very “homely” stay and the bedrooms had lovely views over the little harbour. The furthest Ann had ever travelled was to visit her sister in Aberdeen (about 200 kms away)! We had to be careful to close the front door in case their Houdini Golden Retriever got out – such a nice place to stay!

There was a clothesline on the grassed area beside the harbour across the street from the house. Pauline worked out that this was used to signal to ships if it was safe to smuggle goods ashore. If there was washing on the line it meant the Customs Officer’s were on duty – no washing on the line meant coast clear!

I had been warned in Wick that phone and internet signal was bad in Helmsdale and discovered that to be completely accurate. I have to admit it came as a bit of a shock to me as I had expected mobile reception and wifi to be of good quality and available everywhere in the UK!! I was to discover much to my angst at times that Helmsdale was not to be the only place with reception issues! I was unable to post my first day’s progress on Facebook – so after only the first day I was already going to be in “catch-up* mode.

Overall though – I was thrilled with how the day had gone. Sure it was tough in places. The road surfaces are a lot more like New Zealand than Australia and have that rougher seal surface to Australia that prevents the bikes from “rolling” easily so every inch needs to be ridden.

They have a different manner of channeling water off the roads via actual drainage systems. This meant that in many country areas there is curbing on the side of the road, and not the customary road “shoulder” of tarseal fading out to a metal surface that is in Australia and New Zealand. The white line was right alongside this curbing, so really you are riding on the roadway – and I felt there was no “escape” if traffic got a bit close as hitting the curb would have surely meant a fall!! The drainage grates at regular intervals need to be watched as these are often not level or have “pot-holes” around them. Downhills are also not so much fun as they always seem to have a left or right hand turn at the bottom preventing visibility, so you can’t just charge blindly on!

The plus side was that the road traffic had been extremely light – and what traffic there was had without exception, been unbelievably considerate to me as a cyclist giving a very wide berth when overtaking. This was an extremely pleasant surprise – and I am pleased to say that I found this to be the case throughout my entire ride. I did not have even one single case of – wow – that’s a bit close!!! The drivers just seemed a lot more patient than here! 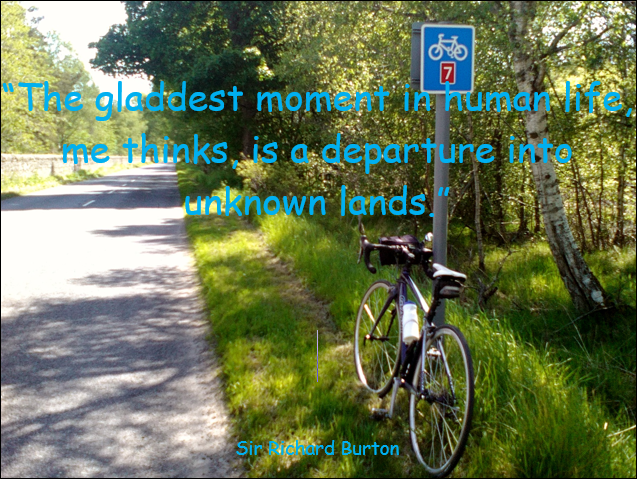