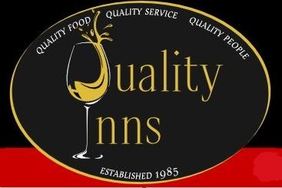 My supporter for today who has very generously donated to
​The Fred Hollows Foundation is:-
Quality Inns of Gloucestershire UK. They have several properties in the region and we enjoyed a great stay at The Bell In at Frampton-on-Severn. 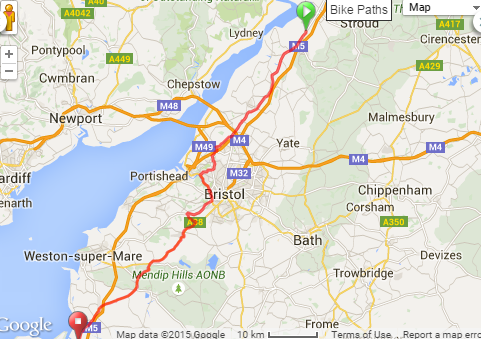 They weren’t early risers at “The Bell” and breakfast didn’t start until 8:30 am. By the time we ate, packed and got back to Cambridge it was 9:30 before I headed off. We were about 30 kms north of Bristol so continued on the A38. Several parts of this road had cycle lanes marked on them which is the first time I have really seen this. Very good!! Maybe because it is a road that most cyclists use when travelling from Land’s End to John o Groats or vice versa.

After about 10 kms I came to a village named Newport – and there was also a Newport Towers Hotel –on the left hand side, although it looked to be in a state of disrepair and I wonder if in fact it is still operating. We met up just before the Bristol ring road and had incredible views across the Severn Estuary and could see the 2 major bridges that head over to Wales. It was a great view but sadly didn’t photograph well at all.

Again I wanted to ride through the middle of Bristol – so I went my way – and Pat went hers!! Plan was to meet  on the south side of the city once we were back on the A38 road. The Bristol Airport was in this direction so I said to Pat, if in doubt, follow signs to the airport and you should be fine.

Bristol is a busy city and it still amazes me how people cycle without helmets weaving their way in and out of the traffic. I guess they know where they are going which might make it a bit easier – but I certainly prefer to have my noggin covered! It seemed to take quite a while to get to the city centre, but I guess as it is England’s 6th largest city I should have expected this. I walked Finn through the pedestrian only section in the middle of town. Despite it being a hilly town (I thought) there were a lot of cyclists around and the bike racks liberally dotted through the centre were all pretty full. Finn got his photo taken in front of a bookshop display launching Chris Froome’s book. Amazing that now, as I write this, he has just won this year’s Tour de France!

Immediately on crossing the River Avon right by the city centre, I was in the district of Redcliffe – completing the Newport/Redcliffe/Scarborough OCD I have!! It was hard to get a shot of St Mary’s Redcliffe so I have taken a pic from google. This was built in the 12th century, another of these amazing feats.

I did manage to get into the beautiful grounds of The Temple at Redcliffe. This was bombed heavily in the second world war in the “Bristol Blitz”. Unsafe structures were demolished and the remainder left as it is today. The gardens are beautiful and the smell from the roses was absolutely amazing. I have never smelt such strong perfumes – so glad I took the time to!!!! Beautiful!!

I followed some bike paths around this area, and at times went down cobblestone lanes – these are NOT comfortable on a road-bike!!

I came to a sign that just said “Cycle path ends” - feeling somewhat “lost” I took my own advice and followed the road until I found signs to the airport. I am sure local knowledge would have helped a lot here. I would see other cyclists nipping off down side roads, yet I seemed to meander around in a big S before finally a sign saying the A38. I rang Pat to see where she was and she reported she had made it safely through the city - well done Pat!! At one stage she stopped at a bike shop to get some degreaser for poor Finn who was getting mighty dirty. The guy there told Pat to follow signs to the Zoo. We must have been on totally different paths as I didn’t see a zoo mentioned anywhere!!

We couldn’t quite work out if I was ahead of her or she was ahead of me so we agreed to continue to the airport. After hanging up and continuing on my way a further 500 metres I saw the pub she said she was at when we talked. I rang, and she pulled over at a small shopping centre so we could meet up in a few minutes.

I had a couple of snacks and refilled my drinks bottle as I didn’t feel that I had done that large climb that was showing on the elevation chart. Immediately on leaving this stop – the climb started. I’m not that keen on these climbs being later in the day!! When I followed the road past the airport there were signs saying no stopping. I could hear a plane approaching and it almost ran me over while I stopped and tried to get a photo.

As well as the uphills, there were some huge downhills!! Despite the roads being better than what I have had most of the trip I am still a bit reluctant to really rip down the hills as they are often very windy and you can’t see too far ahead.

Once down the last hill it was really flat for the last 10 kms of the day as I headed for West Huntspill. I had booked a B & B the night before and as it was right on the A38 I thought we would have no trouble finding it. Pat went on ahead and found it despite the fact that I had tried to mislead her by saying it would be on the left hand side of the road when in fact it was on the right hand side!!

It was a nice little spot right next to an un-used (or lightly) used road, so I took Finn to that side of the fence and sprayed de-greaser liberally over the very messy chain, cogs, derailleur etc. So much muck came off it was incredible. I am wondering if it is because there is so many diesel cars over here as there is this black sludgy stuff that flicks up particularly when the roads are wet. Whatever it is – I am sure being rid of this lot will make things move more easily tomorrow. 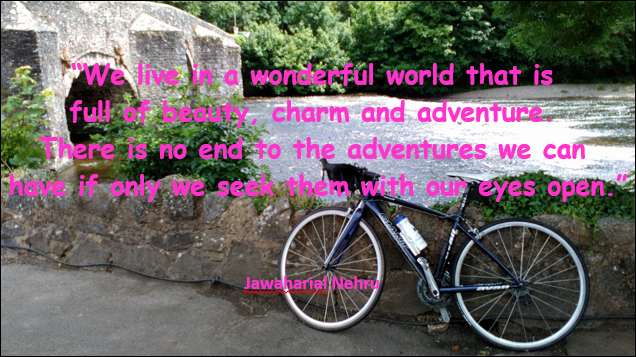