All funds raised during my ride across Australia went to either the Australian or New Zealand Heart Foundation depending on the donor’s wish.
​It was a thrill to be named Best Individual Fund-raiser for 2011 by the Queensland Branch of the Australian Heart Foundation.
​Special thanks to EVERYONE who supported my ride.
Day 9 - April 8th, 2011
Caiguna (WA) to Cocklebiddy (WA)
66.8 kms 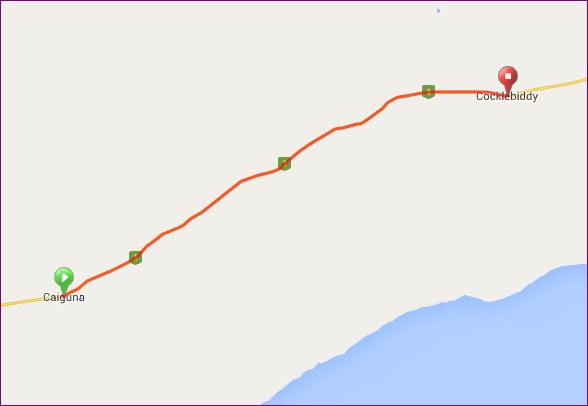 A shorter day today along the Eyre Highway after some pretty long rides - and again - pretty much downhill - yippeee !!!!

Cocklebiddy started as an Aboriginal mission station, of which only the stone foundations remain today. The area was thought to be a potential water source and, during World War II, Army engineers attempted to tap fresh water from the lakes, but it was found that a thin skin of fresh water overlay a vast volume of saline water. The wildlife observatory, known as Eyre Bird Observatory, is accessible from here, over 230 species of birds have been spotted there.

Like other locations in the Nullarbor Plain area, the area consists of little more than a roadhouse. The current business name of the roadhouse is the Wedgetail Inn and like most other Nullarbor establishments has access to satellite television, as well as providing caravan park, and hotel motel facilities.

Cocklebiddy lies on the southern edge of Western Australia's truly vast sheep grazing belt. Within the area are several large scale sheep grazing operations, some larger than a number of European countries!!! One such station is Arubiddy which spans an area over 3200 square kilometres. With limited rainfall sparse stocking rates of about 8 to 10 sheep per square kilometre are the norm.

A good sleep, a shorter distance today, the world seemed a much better place this morning compared to last night!!

After a later than normal breakfast – time to play the 8th golf hole before setting out. Pat lost her first golf ball – the fairways here are something else!!!! She was playing with one of those bright yellow balls that we were sure could be found anywhere, but amongst spinifex salt and other scrubby bushes, it was nowhere to be seen despite extensive searching.

Before setting off, we back-tracked in Jucy to view the famed "Caiguna Blowhole" and took the obligatory photo's despite not being particularly "blown away" by this feature.

While Pat fueled the van, I headed off towards the interestingly named Cocklebiddy. A slight tail wind – wonderful – a pretty flat road – great – but – the flies here have a higher cruising speed!! Even pushing along at about 30 kph as that is what felt comfortable to the legs – I had to keep up the constant fly swishing!! I thought about wearing my fly-net hat over my bike helmet (or under it), but couldn’t work out how I would drink then – so opted to continue on my way – swishing as I went.

The 66 kms was a breeze today (after what I have been doing it almost seemed like a rest day), so it was only late morning when we were setting up camp. Played the 9th hole of the Nullarbor Golf Course on what could only be deemed very manicured fairways compared to those we have encountered since Kalgoorlie!!

Pat took the opportunity to use the laundry here, and in no time had a long line of washing flapping in the very warm breeze. It all dried in no time.

Chatted that evening with an interesting array of people, including one guy that test drives Ford vehicles across the Nullarbor and back, a truckie from Adelaide who had slept the day at Cocklebiddy and was off to start his night drive, and 4 “Mini Moke” fans – who were on their way to an Easter “Muster”  or maybe that should be “Rally” (I'm not sure if Mini Mokes "muster" or "rally") at Wagga Wagga. Great conversations comparing notes about the Nullarbor Golf Course holes, talking Mini Moke talk, and then – YAY – more bike talk as one was a cyclist and owned the “boy version” – a Giant Defy – of my “girl version” – the Giant Avail!!!

Still no phone and internet connection out here – parts of the world do cope without facebook!!! At least I could sit in the “laundry” today, charge the computer and get my writings up to date so when we reach an area where phone and internet reception can be had, I can just copy it across.

Now – have I said anything about the road trains yet??? I don’t think so – but I have to give them huge ticks for being extremely courteous!! Some announce their arrival behind me with a pleasant little “toot toot” of the horn, and all but one (and there have been thousands) have given me a nice wide berth as they overtake. Top marks guys – I do appreciate it!!! I hear from caravanners you talk about me on UHF channel 40 - hahahaha !!! Mad lady on a bike crossing the Nullarbor - hey but thanks for warning other drivers to look out for me - that is really good stuff and I do appreciate it!! 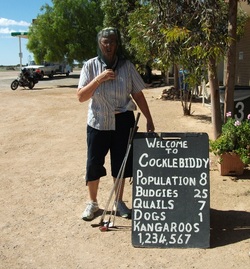 No stats for flies!! The elegant head wear is a MUST here!!
I have always struggled to achieve excellence. One thing that cycling has taught me is that if you can achieve something without a struggle it's not going to be satisfying.
Greg LeMond