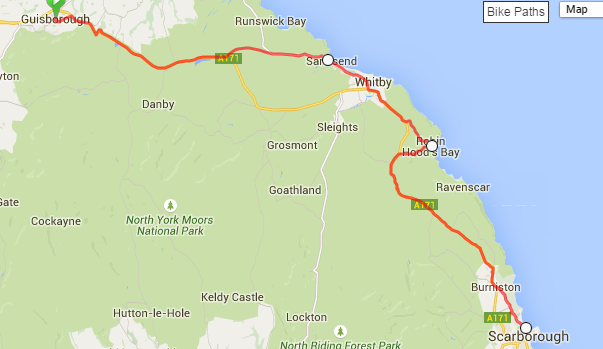 Because of the extra kms added on to yesterday’s ride – today will be shorter distance-wise – duh – how obvious is that! A good thing though as we were to meet up with Liz today who had promised fish and chips for lunch at Sandsend!!

After a big yummy cooked breakfast at the Fox and Hound we were on our way. A bit later than usual as we didn’t need to be at Sandsend until 12 noon. I don’t know if it was because I had eaten too much breakfast (probably) or if the road was particularly steep – but I only seemed to travel about 1 km and then was faced with a very steep climb!! Steep enough that I had to get off and have a wee walk!!!! Oh well – quiet road, no traffic – what else is there to do!!

I also noticed that I was having a bit of an issue changing gears – to be honest, I had been noticing it wasn’t quite as sharp in its action over the last couple of days. The lever was getting harder and harder to push. It was a bit of a worry, but my technical skills in that area are zilch, so I promised Finn that he could definitely visit a bike shop in Scarborough either this afternoon – or tomorrow when we would be having a rest day there.

Once up this “hill” I enjoyed the undulating ride through some lovely farmland. Stone walls, beautiful trees, lush pasture, haylage being made etc. Pat had phoned and told me to take care as once I turned off the A171 on to the B1266 there were cattle grids ahead and that when I started the descent into Sandsend she warned it was very steep – and stressed VERY steep.

Turned off the main road to cut across to Sandsend, successfully negotiating the “grids” I then rode through eerily beautiful moor land. It felt like at any minute now a black Anglia belonging to the Aidensfield Police would come flying past me! It was totally different from the lush land I had just come through and was very boggy and peaty. There must have been quite a bird-life here as I saw many pheasant like birds sadly killed on the road. It wasn’t too long though before I dropped down out of this type of landscape and was once again back into good farmland. Very few cattle to be seen, but lots of haylage being made so I can only assume they are still indoors. I thought in “summer” more stock would be out in the fields.

Pat had not exaggerated about the steepness of the drop into Sandsend! I have never ridden down such a steep road! I was worried about the rims getting hot under constant braking, so stopped and took a few photo’s half way down. It was made a bit more difficult with the road being wet as well – but I made it safely, with very tired hands at the bottom. I would not have liked to be going in the opposite direction!! In fact – I know – I would not have been able to!!

I had set off in fine conditions, but there were a few showers along the way, and when I met up with Pat and Pauline in Sandsend there was a period of rain. It turned pretty cold too. We had arrived early so had a look around this small coastal village awaiting Liz’s appearance. A couple of phone messages saying she was running late – but not too long passed before she arrived, but “sans" Fish and Chips!! Not to worry – we ate at a nearby café that served beautiful food, Liz gave us the Fish and Chip money to donate to The Fred Hollows Foundation, (thanks a lot Liz)!! We had a great chat – and discovered that episodes of Heartbeat were filmed in her house!! Fascinating!! Also discovered what a village the world is and how she became friends with our wonderful friend Joan Wilson-Jones in Brisbane.

All too soon – it was time to move on and cut out the remaining 40 kms to Scarborough. Again – I had booked a place on-line so at least no hassle finding accommodation when we got there. There were 2 interesting villages to call into along the way – Whitby and Robin Hood’s Bay. Both were delightful and with the Captain Cook connection, of great interest. Oh – I don’t think I mentioned this when I was writing from Kingussie (Scotland) – but we were told that Captain Cook’s mother was born just out of that village!!

I would describe the road between Robin Hood’s Bay and Scarborough as hilly as opposed to undulating – but it may have felt this way as it became impossible to change gears on my rear wheel, so in effect I rode this leg using only 2 gears. Yesterday’s longer than usual ride may also have contributed to the “struggle” of the day. It wasn’t the easiest ride I can assure you!! In my mind the “proposed – maybe” rest day at Scarborough was now a definite to get Finn attended to!

It had been a ride through a great variety of landscapes today – lush farmland, barren moors, fabulous sea-views, beautiful seaside villages, then up and down dale until I reached Scarborough. I saw loads of signs for walking paths, and thought of Annie and Don and Liz Stockman wondering if they are paths they have trod!! Sandsend was lovely, as was Whitby and Robin Hood Bay!!

I was excited to arrive at Scarborough as that name has a connection with all my long rides, and was the sole reason why I had travelled down this eastern side of England. The wind had picked up by now and when I lent Finn against the Welcome to Scarborough sign he was blown over. Poor Finn – he wasn’t feeling the love at all without this happening as well!

Pauline and Pat had found the hotel which I will talk more on in tomorrow’s ramble. Pauline had also sussed out where the bike shops were located, so Pat and I put Finn in the car and headed off as it was 4:30 pm. Great disappointment – the “Giant” shop, “Richardsons Cycles” was closed. The other shop was further out of town and fearing the same result – vowed to return to Richardsons right on opening time in the morning.

We returned to the Clifton Hotel which stood in a beautiful position on the North Bay cliff tops. We wandered across the road to the Scarborough Bowls Centre and were amazed to find a huge indoor covered bowling rink, as well as 2 outdoor Crown Bowls rinks. It was a great Club and we organised for Pat to come back tomorrow and have a roll. 5 pounds per hour.

Back across the street – we played musical cars with a parking permit in the limited parking zone – and then retired to the bar, looking out over the bay and ordered a pint each. The bar meals looked great – and lived up to their looks!!

A pretty good day – great scenery, successful meet up with Liz – and now – pretty much half way between John O Groats and Land’s End!! 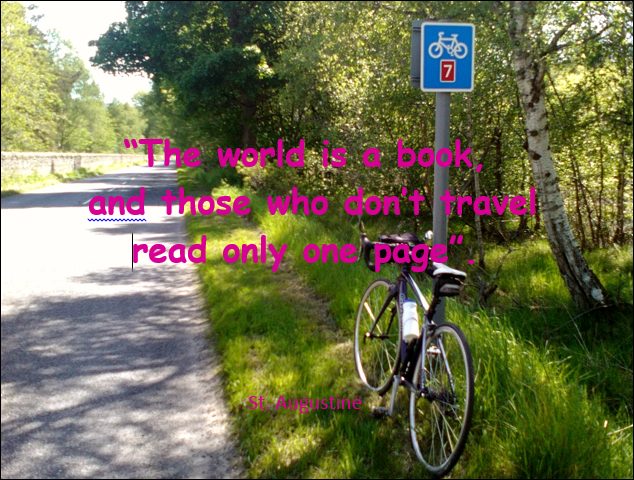