All funds raised during my ride across Australia went to either the Australian or New Zealand Heart Foundation depending on the donor’s wish.
​ It was a thrill to be named Best Individual Fund-raiser for 2011 by the Queensland Branch of the Australian Heart Foundation.
​Special thanks to EVERYONE who supported my ride.
Day 10 - April 9th, 2011
Cocklebiddy (WA) to Madura Pass (WA)
93 kms 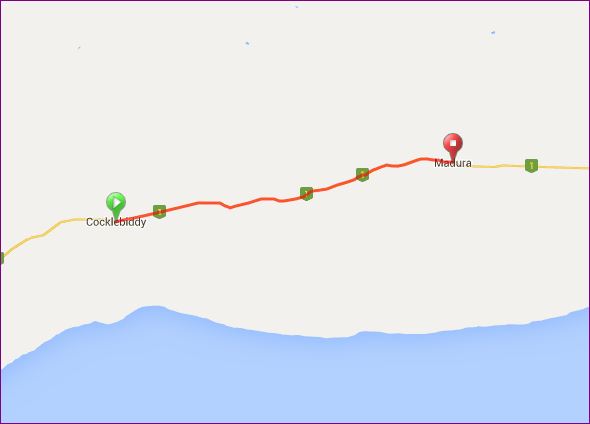 Looking good for a pretty flat ride along the Eyre Highway today before "dropping" down into Madura.

Again, this is basically a journey from one roadhouse to another!!!! I need to get used to this!! 2 km west of Madura is a scenic lookout with sweeping views of the Madura Pass across the escarpment and the Roe Plains. Natural blowholes are also found nearby. The area is used for pastoral purposes, mainly sheep rearing. Surrounding Madura is the Madura Shelf stretching 265,600 square kilometres of predominately sedimentary rock, part of the Bight Basin which has been found to contain crude oil and geothermal gradients.

I don’t know what the temperature went down to last night – but I suspect closer to 10 than 20!!! Brrrrrrrrrrrr – so looked forward to a nice hot shower in the morning! Pat went over first – started to shower, lathered up the hair shampoo – and then silence in the outback!! The generator that runs 24/7 to run EVERYTHING at the Cocklebiddy Roadhouse failed!! No water to the shower – hahahaha – well it wasn’t really funny. Gradually, one by one, the other campers decided things would not return to normal for some time and drifted off. After Pat got the shampoo out of her hair with freezing cold water – we had a quick breakfast and decided to push on. It was still pretty cool, so much so that I wore a t-shirt under my bike shirt – and didn’t raise a sweat for the first 2 hours of cycling – 54 kms travelled. Pretty flat roads, a variable wind that seemed to be mainly a southerly so a cross wind, but pretty pleasant through what seems to be an amazingly green desert!! Locals have been saying the weather has been very unseasonal – the winds particularly – at a time of the year that they should be westerly (as I had hoped) they had been easterly or south-easterly for weeks now!!

While we were at our first rest stop, much tooting and waving as our 4 new found friends passed in their “Mini Moke’s” while we finished our first coffee of the day.

Continuing on, and a road sign saying “Grid” appeared, fortunately Pat had preceded me and stopped me, otherwise there could have been a disaster!! Thank goodness she did, otherwise with my narrow tyred road bike, it may not have been a successful crossing!! This was certainly not like the "New Zealand Cattle-stop" - it was without a doubt - a "grid" - I could easily have fallen - no, without doubt - I would have!!!!! This was the first of several "grid" crossings across the desert. Now the warnings of wild animals on the road appeared, but apart from smelling the rotting remains of road kill from the previous night, no other sign of “livestock”.

Approaching Madura Pass we stopped at the lookout and took in the HUGE vista looking down onto the flats where I was about to descend to. It is one thing I love about Australia, these HUGE panoramic views that go for as far as one can look!! I had hoped for some high speed down the hill, but the swirling winds, combined with the wind of passing road trains made it necessary to take things carefully - spoiling my planned "blat" for the day.

Another golf hole – only a par 3. The mini-mokers must have done well as they were gone by the time we got to play. Almost a par for Pat on the 10th – robbed tho – how did that putt miss? This golfing venture has proven to be a great talking point amongst travellers. Golfers and non-golfers seem to use it as break in their travels. I understand the concept came about from a group of guys having a social drink - perhaps that is where all the best ideas are produced!!

I felt really good after today’s ride, and toyed with the idea of pushing on, as with the early start, the afternoon was still available. However, decided against it – I did really cook myself the Balladonia to Caiguna day, so I am not keen to do that again!! Also, there will be a couple of long consecutive days coming up as the “Irish bush telegraph” last night told us that there was nowhere to stay at Yalata nowadays – so I will have to combine 2 days of riding there.

I am informed that 25 kms east of Mundrabilla – mobile phones will be able to be used again!!!! I really look forward to getting some stuff up on my website in 2 days time!!! Seems like forever since I have looked at Facebook and cleared my emails!!! And I am sure you will all be pleased to know, that the part of my anatomy that rhymes with this place is all recovered and ready for the rest of the journey!!!!
Consider a man riding a bicycle. Whoever he is, we can say three things about him. We know he got on the bicycle and started to move. We know that at some point he will stop and get off. Most important of all, we know that if at any point between the beginning and the end of his journey he stops moving and does not get off the bicycle he will fall off it. That is a metaphor for the journey through life of any living thing, and I think of any society of living things.
William Golding