All funds raised during my ride across Australia went to either the Australian or New Zealand Heart Foundation depending on the donor’s wish.
​It was a thrill to be named Best Individual Fund-raiser for 2011 by the Queensland Branch of the Australian Heart Foundation.
​Special thanks to EVERYONE who supported my ride.
Day 14 - April 13th, 2011
Nundroo (SA) to Penong (SA)
81 kms. 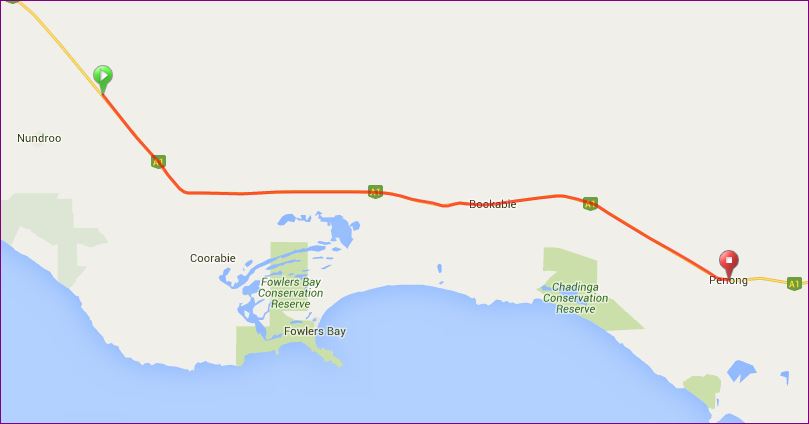 The Elevation Graph for this section of the Eyre Highway looks all over the place but as it is only within a 50m height, I don't think it will be as bad as it looks!! Fingers crossed anyway!!

Penong is a very small settlement located on the Western edge of South Australia's grain growing belt. Scattered around are dozens of windmills that pump water from the Anjutabie water Basin. This water is supplemented by the use of rain water and water is also carted by truck from a reticulated water supply connected to the Tod River pipeline some 15 kilometres east of Penong. South of Penong are massive deposits of salt and gypsum in Lake McDonnell. Each year 100,000 tonnes of salt are harvested from brine pools and exported from Port Thevenard to the eastern States. Lake McDonnell's gypsum deposits are the largest in the Southern Hemisphere and cover an area of 87 square kilometres to an average depth of 4.8 metres. That's a lot of gypsum!!

Cactus Beach is located 21 kilometres south of Penong and surfers from around the world and Australia frequent the area to surf 1 right hand and 2 left hand breaks.

I recently read that shark attacks have occurred in this area - I think I'll give swimming here a miss and just wander down the beach!!!!

A shorter day to day, hopefully to let the legs recover a bit from a fair bit of biking over the last 5 days. After going to sleep listening to the sound of light rain on the roof, it was great to wake to bright blue skies and sunshine even though it was pretty crisp!

Seemed to be up and about reasonably early, so donned my windproof jacket to keep warm and headed for Penong pretty early. The facilities at Nundroo are pretty poor, in fact it would have to be the worst "caravan park" of the trip. One toilet and one shower for all - ridiculous!! The others were "out of order" but it looked like they had been that way for sometime and that nothing was being done to remedy the situation.

This was however, an extremely lovely ride! After crossing the Nullarbor and that hilly section to here, I now biked through prosperous looking land compared to what it has been for the last week. I kept looking for Wombats – there are supposed to be thousands here, even millions – but I didn’t see any - I guess they are nocturnal animals afterall. I suspect the very squashed remains of roadkill could have been some.

Very glad for the short ride today, it was very gently rolling country but my legs felt dead on any uphill sections even if they were only slightly so. The very pleasant surprise when arriving at Penong was the immaculate manner in which the caravan park is kept. Extremely tidy and clean facilities with well manicured grounds. How nice it was to have a grass site to park on instead of amongst the dustiness of the desert!! Such a total contrast to last night's stop!!!

Penong is the penultimate golf spot of the Nullarbor Golf Course and is by far the best presented hole since the first two were played at Kalgoorlie. That seems so long ago now!! Pat managed a par on the par 4 hole - seems she is playing herself back into her old form!!

Penong is quite a busy place – great to be seeing signs of life -  the biggest township since Norseman!! Besides the Roadhouse, there is a Hotel, a General Store with a Post Office, the caravan park, a school and a church!! I feel like we have returned to civilisation.

In the main tho, it was a pretty lazy day, Pat caught up with all the washing and “ironing”, gave the van a good tidy up and reshuffled a few things, so everything is very orderly now!!

Had a big meal of vegies and fruit as we cross the quarantine checkpoint tomorrow, which means no fresh fruit or vegetables are allowed to be taken into South Australia.

Can you believe it – the guy in the next door camper is from Tasmania and he cycles daily – and is also the proud owner of a Giant!!!!! More bike talk – great!!!

Today is the end of 2 weeks "on the road". This week I have biked every day and covered 963.85 kms with an average of 137.7 kms per day. Total kilometres biked so far = 1905.77
For instance, the bicycle is the most efficient machine ever created: Converting calories into gas, a bicycle gets the equivalent of three thousand miles per gallon.
Bill Strickland - The Quotable Cyclist