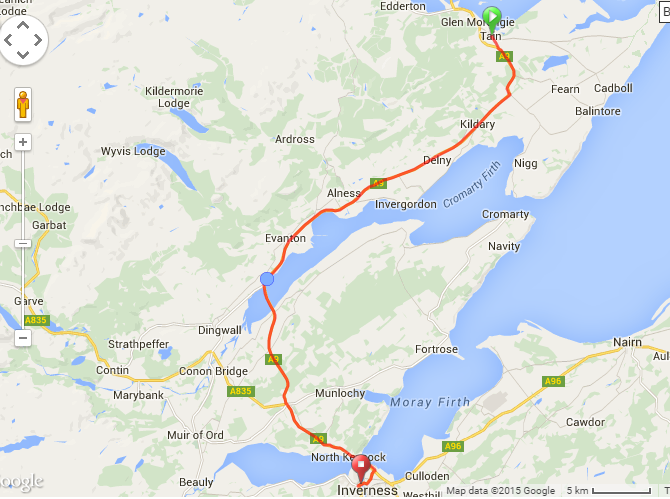 Special thanks to today's supporter - Dales Cycles - the Giant Bicycle agents in Glasgow - I purchased the last of my cycling requirements for the trip here, and they provided me with a nice little discount. This amount has been donated to The Fred Hollows Foundation.

Again I woke early (5:00 am) to beautiful sunny skies and light winds – but by the time breakfast was served and we were on the way, clouds had appeared and the day dulled. Not to worry – I was looking forward to a pretty flat / slightly undulating first 35 kms through more beautiful countryside!

I normally like to do a couple of hours of riding before meeting up with Pat and Pauline. Because we were in two different B&B’s I set off while Pat went and collected Pauline, and I think I had made a pretty good distance along the A9 before they caught up and passed me with a “toot-toot” to say g’day!

Again we had all been extremely well fed at breakfast. I was trying to decide whether such a large breakfast before biking was suiting me or not. Most times at home I get up and ride without eating anything and get home for breakfast.

A bonus this morning was that the very kind lady where Pauline had stayed had baked a cake for her to bring on her way!!!! How nice was that??!!??!! Morning tea was extra good today!!

As I looked out over the Cromarty Firth I could see oil drilling rigs out at sea, and closer to Invergordon they were very close to shore. Apparently they are brought here for repair. Most of the North Sea oil wells are serviced from here.

The wind was extremely light and with only slightly undulating roads it was pretty much a perfect cycling day!! Traffic became a little busier once over the Cromarty Firth Bridge - 1.5 kms long. There were some sections of this road that had a “shoulder” similar to Australian roads – only a lot narrower. Where there is no shoulder on the road the traffic and in particular trucks and buses are excellent and wait until the way is clear of on-coming traffic and they overtake on the other side. Where there is a shoulder though, they expect you to stay on it and they whiz past on their part of the road.

The hill from kms 35 to 40 was not nearly as bad to ride as it appeared on the elevation profile - much to my delight - but I did stop part way up to talk to a field full of inquisitive donkeys. I think they liked my jacket - or just thought I was mad – but they came running over, ears pricked and had a good stare!!

If I looked to the west – there was still a bit of snow on the top of the hills ……. that explained the icy wind!!

We had decided our meet up point would be the Information Centre by Inverness Castle. While it looked easy to get to on the maps - this turned out to be a bad call. Road works, new building projects, one-way roads, lots of traffic – it was a nightmare for the car.

Finding a B&B was even worse. Everything seemed to be booked out!! If it hadn’t been for the lady at the Information Centre telling us there were no B & B’s if we continued south on the A9 I would have continued along that way!!

I can’t recall the number of places we tried - but it was a lot!! Extremely exasperating when they have a sign saying “Vacancies” showing – yet when we go in to ask, they say they are full and just haven’t changed the sign. Grrrrrr!!!! We stopped and had a hot meal at a pub for a late lunch (early dinner) and contemplated what to do next!! We left Pauline and her ankle with Finn at this “pub” and headed off in search again. Eventually our luck “sort of” changed and we booked in to the Lethington B & B. This was an absolutely beautiful old home with stunning grounds – BUT – there were a few “issues” and I have to say the room that was “prepared” for Pauline was not the best – but subsequently on the trip has given us a lot of giggles!!!!! Still – at times like these – we were pretty desperate to find somewhere that Pauline could rest and put her ankle up and apply ice!!! Luckily little by little the swelling is reducing so at least that is a good sign.

The extra kms taken walking the streets to find accommodation had taken its toll on me – so I just rested up to restore energy levels for tomorrow’s ride rather than go back and explore the centre of Inverness. I did take time to go and give Finn a bit of a clean and check that everything was still "tight" after jiggling along the roads. My drinks cage had started to loosen off a bit - so whatever I could see to tighten got tightened. I gave the chain a quick clean and applied some more chain-lube. 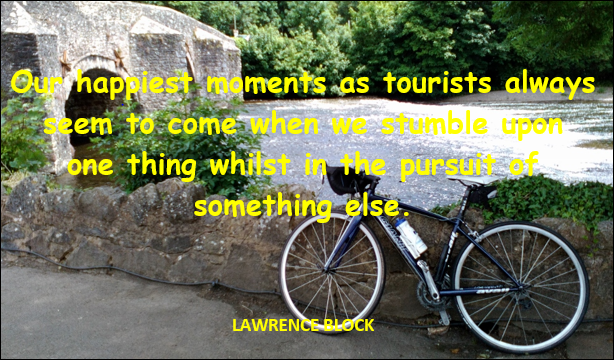