All funds raised during my ride across Australia went to either the Australian or New Zealand Heart Foundation depending on the donor’s wish. It was a thrill to be named Best Individual Fund-raiser for 2011 by the Queensland Branch of the Australian Heart Foundation. Special thanks to EVERYONE who supported my ride.
Day 21 - April 20th, 2011
Port Augusta (SA) to Peterborough (SA)
137.2 kms. 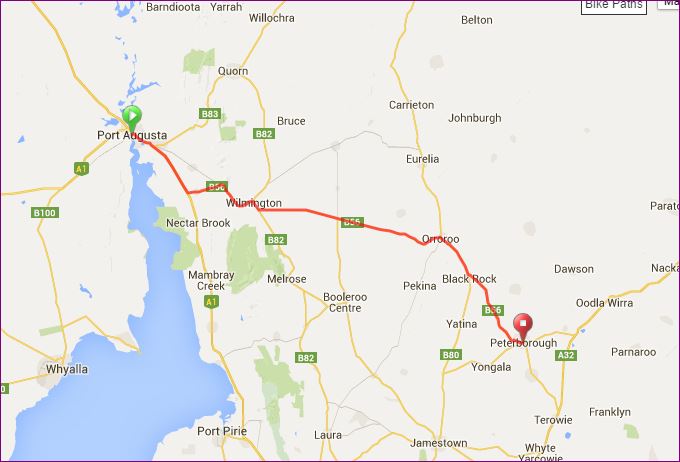 This is going to be a big day riding. Leaving from sea-level and climbing to around 600 metres as we leave Highway 1 - and continue on Highway B56 to head towards The Barrier Highway (32).

This is through the southern part of the Flinders Ranges - so there will be some really hilly sections. This area is not as barren as other areas we have come through, as this area is known for its rural activities - sheep farming and wheat and barley production.

Very small villages are dotted along the route, so it won't be so lonely!!

It was sad in some respects to be leaving Port Augusta today, as we met some terrific people, saw some great things and thoroughly enjoyed our stay!! Phil, Chris and Greg  - a builder, a painter and a finance man, were great company, and wonderful contributors to the Heart Foundation. Then great chats with Graeme and Donna who had been “on the road” for 3 weeks – living their dream to travel extensively around Australia. We swapped websites – I’ll enjoy following their travels for the next 8 months and 1 week – they will only get another 3 weeks of mine!! To look at my website today and see they made an on-line contribution to the Heart Foundation was wonderful!!

However, starting today I had some apprehension that this day would be one of the toughest I was to face. Sure the climb on the first day out of Perth (Greenmount Hill) had been difficult, but I had been thinking to myself that the “climbs” through the “ranges” hadn’t been as bad as I had expected. This may have something to do with my “kiwi” upbringing – when the word “ranges” appears on a map, my mind thinks of Kaimai’s and Mamaku’s – however  the Fraser Ranges, and the Gawler Ranges thus far had really proven to be more like “undulating” and ‘slightly hilly” in comparison!!

The first 20 kms today was heading on the main road between Port Augusta and Adelaide, and was certainly the busiest stretch of road since Perth with a lot of car and truck traffic. The fact that it was flat made for easy progress. A left hand turn was made to head towards Peterborough and while the road “appeared” flat, and I guess most motorists would describe it as such – to my “quads” it was definitely not flat!! After about 8 kms of this, I stopped and looked back and was amazed to see how far I had in fact climbed!! At one stage it seemed such tough going I had stopped to check that I didn't have a flat back tyre!!

Worse was to come – these “ranges” – part of the Flinders Ranges – were most definitely “Kaimai-like!! So the loooooooooooong climb continued at a steeper, twistier rate!! Ever hopeful that around the next bend I would see the top – and ever disappointed that all I saw was more climbing to be done. On and on and on, up and up and up – all gears of the bike used – often up and out off the seat, push, push, push – just as well I didn’t have a heart rate monitor on!!

Eventually the top came into view – I had made it – and earth’s creator rewarded me with a wonderful sweeping downhill cruise into Wilmington. By the time I arrived there my heart had regained a much steadier beat!! It was a terrific feeling “whirring” down the hill, my bike has been going magically and all I could hear was the sound of the tyres against the tarseal.

Even though I have been in South Australia for several days, Wilmington is what my idea of a “typical” South Australian town is. The “pub” is a delightful building, and the houses all those attractive brick/stone buildings that are in abundance here. You take a photo of one, only to see streets of them, many beautifully kept and so attractive. Wilmington is obviously a quieter town than in its heyday - I believe there used to be a Young and Gordon branch here.

A quick break to take on more energy gels and bars as this had been a serious morning’s work, and then continued along the road to Orroroo. This road was straight, but again with the ever such a slight climb, that got to me at times!! I had considered shortening the day and stopping in Orroroo, but as the wind had picked up to be a pretty helpful tail wind – decided to have late lunch here and continue on as planned to Peterborough.

Orroroo is a lovely town, with a beautiful main street divided by attractive gardens with chairs and tables that made a perfect spot for lunch. Next to the Post office were the “Restrooms” – the traditional sort – definitely a “restroom” and very unlike the “dunny” of Iron Knob a few days earlier!!

Although only a further 35 kms to Peterborough I was concerned it may have been “hilly” so asked a “local” as to the state of the road. “Oh it’s flat” I was told – “Not that I’ve biked it, but yer, I’d say it was flat!” That sounded like music to my ears, even though I was a little sceptical – but at least he hadn’t said I had to go through “ranges”.

It turned out to be a very pleasant ride, in the main. The first 11 kms dead flat, but by now a healthy side wind had blown up. I have to say, I did have my closest call with falling off when 2 large trucks travelling in the opposite direction passed and the vacuum or whatever they made with the wind saw me really buffeted about. Serious wobbles!!! But, another left hand turn saw that side wind become a wonderful tail wind to fly the remaining 24 kms into Peterborough.

It was a good challenging day, through great farmland. A lot of ploughing was taking place, saw sheep and cattle grazing, quite a bit more activity than other rural areas so far.

Today is the end of week 3 of the journey. This week I have only covered 699.20 kms as I had 2 rest days. My 5 days of riding have averaged 139.84 kms per day. Total so far = 2604.97
To be a cyclist is to be a student of pain....at cycling's core lies pain, hard and bitter as the pit inside a juicy peach. It doesn't matter if you're sprinting for an Olympic medal, a town sign, a trailhead, or the rest stop with the homemade brownies. If you never confront pain, you're missing the essence of the sport. Without pain, there's no adversity. Without adversity, no challenge. Without challenge, no improvement. No improvement, no sense of accomplishment and no deep-down joy. Might as well be playing Tiddly-Winks. - Scott Martin